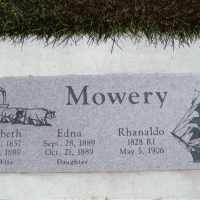 The Life Summary of Rhanaldo

Put your face in a costume from Rhanaldo's homelands.

The Dorr Rebellion, led by Thomas Wilson Dorr, took place from 1841 until 1842. During the Rebellion, the middle-class residents of Rhode Island attempted to force broader democracy to the state legislation.

English: probably from a variant of the Anglo-Norman French personal name Mory, a short form of Amaury (see Amery , Morey ).History: Roger Mowry (c. 1612–66) emigrated from England to MA before 1634, when he married Mary Johnson in Roxbury, Suffolk County, MA.