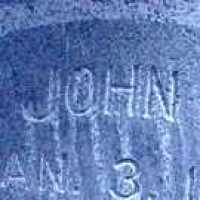 The Life Summary of John Kerr

Put your face in a costume from John Kerr's homelands.

Scottish, also common in northern Ireland: habitational name from Irvine in Ayrshire, which is named from a Celtic river, Welsh ir, yr ‘green, fresh’ + afon ‘water’. There has been much confusion with Irving and Irwin .Irish: variant of Irvin .English: variant of Erwin .