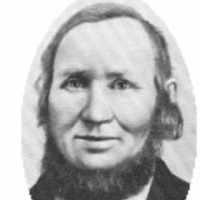 The Life Summary of Sidney Algernon

Put your face in a costume from Sidney Algernon's homelands.

Pioneers Gully/Spencer Company 1849 Handcart Rescue Companies 1856 Sidney Algernon Knowlton was born at Ashford, Connecticut, May 24, 1792. He was the oldest of six children born to Ephraim and Jemim …