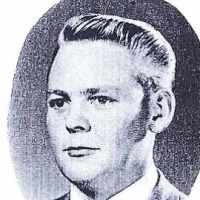 The Life of Dennis Francis

When Dennis Francis Anderson was born on 8 October 1934, in Barnwell, Taber Municipal District, Alberta, Canada, his father, Hillman Monroe Anderson, was 36 and his mother, Myrl Johnson, was 35. He married Dorothy Karl on 21 February 1958, in Shelby, Toole, Montana, United States. They were the parents of at least 1 son. He lived in United States in 1935. He died on 15 October 1982, in Red Deer, Alberta, Canada, at the age of 48, and was buried in Barnwell, Taber Municipal District, Alberta, Canada.

Put your face in a costume from Dennis Francis's homelands.

This Act was created a basic right to a pension in old age, and insurance against unemployment.
1947 · The Presidential Succession Act

As written by Myrl in her memoir: Melvin was born in this house on his father's birthday, the 31st of October 1919. It was very cold and the snow was about a foot deep. It stayed very cold all wint …