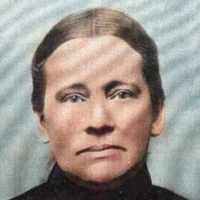 The Life Summary of Emma Caroline

Put your face in a costume from Emma Caroline's homelands.

Some characteristic forenames: Scandinavian Erik, Aksel, Alf, Arndt, Egil, Niels, Ottar.Norwegian and Danish: patronymic from the personal name Arne, a short form of any of various Norse names of which arn ‘eagle’ is the first element (see Arne 1).