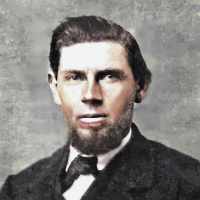 The Life Summary of Harrison

Put your face in a costume from Harrison's homelands.

JOURNAL OF HARRISON SPERRY Written with his own hand and commencing on the 17th day of January 1907.) (1847 Pioneer to Utah) (This is a typed copy of the original completely hand written Journal of H …