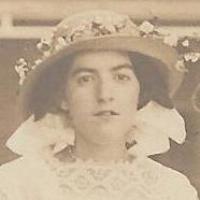 Put your face in a costume from Edith Louise Mabel's homelands.

English (mainly West Midlands): nickname from Middle English pr(i)est ‘minister of the Church’ (Old English prēost, from Latin presbyter, Greek presbyteros ‘elder, counselor’, comparative of presbys ‘old man’). It may have denoted someone with a pious manner or possibly for someone who had played the part of a priest in a pageant. It may occasionally have been used to denote someone suspected of being the son of a priest but evidence for this is lacking.History: A John Priest is recorded as being in Woburn, MA, as early as 1675. The Mayflower Pilgrim Digory Priest of the Netherlands died the first winter at Plymouth in 1620, leaving behind a widow who remarried and two daughters, who did not pass on the surname.