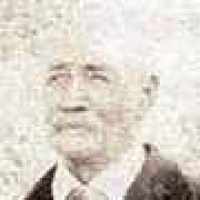 The Life Summary of George Amaziah

When George Amaziah Henson was born on 15 May 1849, in Deanshanger, Northamptonshire, England, United Kingdom, his father, James Henson, was 43 and his mother, Hetty Lancaster, was 39. He married Pauline Sussanah Watkins on 30 January 1877. They were the parents of at least 3 sons and 8 daughters. He lived in Passenham, Northamptonshire, England, United Kingdom for about 10 years and Utah, United States in 1870. He died on 14 March 1911, in Lehi, Utah, Utah, United States, at the age of 61, and was buried in Lehi, Utah, Utah, United States.

Put your face in a costume from George Amaziah's homelands.