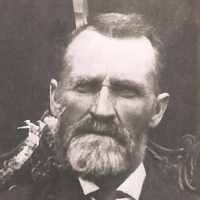 Put your face in a costume from Reuben Andrew Robinson's homelands.

English (Cumbria and Lancashire): habitational name from a place inthe Lake District named Blaisdell, from the Old Norse bynameBlesi (from blesi ‘blaze, white spot’), or from thesame word used in the sense of a white spot on a hillside, + Old Norsedalr ‘valley’.

THE FIRST MARTYR . . . IN THE PRESENCE OF ANGELS