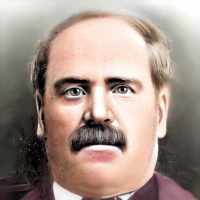 The Life Summary of Mosiah Works

Put your face in a costume from Mosiah Works's homelands.

Life began for me on a wintry day of March 12, 1912, when Newell A. Booth and Minerva Findlay Booth, and my 2 year old sister, Lucille, welcomed me into their home in Fish Haven, Idaho. Fish Haven is …