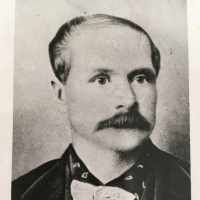 The Life Summary of Benjamin Nephi

Put your face in a costume from Benjamin Nephi's homelands.

Benjamin Nephi Adams, the eldest son of George Phillip and Sara Ann Beynon, was born 29 October 1841, at Merthyr Tydfil, Glamorganshire, South Wales. In 1860, the family (Benjamin, his parents a …