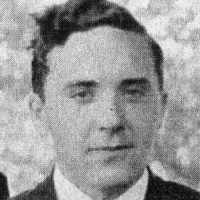 The Life Summary of Jesse William

Put your face in a costume from Jesse William's homelands.

The UK becomes a permanent member of the UN Security Council.

I was born on May 29, 1921 to Daniel Davidson and Jane Sutherland: both were born in the village of Hopeman, Morayshire, Scotland and both were ‘naturalized’ American citizens. My mother was 42 years …