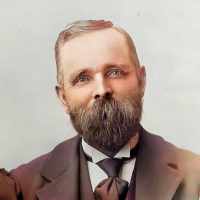 The Life Summary of James Jarvis

When James Jarvis Chandler was born on 16 July 1849, in Eynesbury, Huntingdonshire, England, United Kingdom, his father, Samuel Chandler, was 48 and his mother, Mary Jarvis, was 38. He married Harriet Eliza Cordon on 7 October 1874, in Endowment House, Salt Lake City, Salt Lake, Utah, United States. They were the parents of at least 3 sons and 7 daughters. He died on 20 April 1922, in Rigby, Jefferson, Idaho, United States, at the age of 72, and was buried in Rigby Pioneer Cemetery, Rigby, Jefferson, Idaho, United States.

Put your face in a costume from James Jarvis's homelands.

From the biography of James Jarvis Chandler

Biography of James Jarvis Chandler. On the 16th day of July, in the year 1849, in the village of Eynesbury, Huntingdonshire, in far away England, a baby boy came to brighten the home of Samuel and Mar …