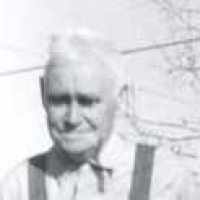 Look in IN THE BEGINNING My family came from England. As most people; they were very poor and the children had to work while they were very young. Mother was born August 8, 1884 in the small …