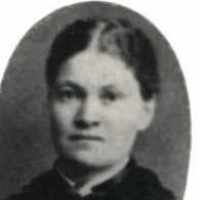 The Life Summary of Mary Moiselle

Put your face in a costume from Mary Moiselle's homelands.

English (of Norman origin): from the Middle English, Old French personal name Ha(i)mon, the oblique case form of the ancient Germanic Ha(i)mo, a short form of various compound names beginning with haim ‘home’. It frequently developed excrescent -d, giving Hamond, Haimund, and Hawmond. Alternatively, the name could derive from the Middle English personal name Hamund (Old Norse Hámundr, composed of the elements hár ‘high’ + mund ‘protection’), which may have been used in Normandy and in 12th-century eastern England, but the former explanation is more likely. The surname was sometimes confused with Almond and Ammon .English: in the Bradford area of Yorkshire, the name is a shortened form of Ormondroyd, formerly Hamondesrode, from a lost place in Birstall (Yorkshire), named with the Middle English (Old French) personal name Hamon (1 above) + Middle English roid, a southern Yorkshire pronunciation of Old English rod ‘clearing’.Irish: generally an importation from England, but occasionally an adopted name for Mac Ámoinn, see McCammon .