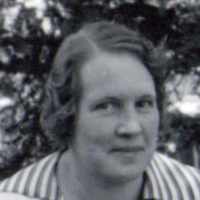 The Life Summary of Emily Etta

Put your face in a costume from Emily Etta's homelands.

The Hobble Creek Hydroelectric Power Plant was completed in 1904. Many poles and wires were installed to bring power into the town and its homes. The plant is still in operation today.

English and Scottish: habitational name from any of numerous places throughout England and Scotland so called, from Old English thorn ‘thorn tree’ + tūn ‘farmstead, estate’. The placename is most frequent in northern England, especially Yorkshire, where there are at least 16 possible sources for the surname.Irish: Anglicized (translated) form of Gaelic Mac Sceacháin ‘son of Sceachán’ (see Skehan ).Irish: shortened Anglicized form of Gaelic Ó Draighneáin ‘descendant of Draighneán’ (see Drennan ).

She was a Good Grandma

I have some fond memories of my Grandmother, Emily Anderson, she was a good cook and we loved her cooking, my favorite were her pies and rolls. But, at Christmas her Ham Loaf and Bread Pudding were t …