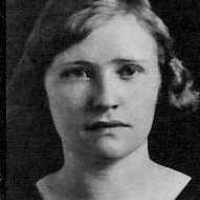 The Life of Reta Alice

Put your face in a costume from Reta Alice's homelands.

President William McKinley was shot at the Temple of Music, in the Pan-American Exposition, while shaking hands with the public. Leon Czolgosz shot him twice in the abdomen because he thought it was his duty to do so. McKinley died after eight days of watch and care. He was the third American president to be assassinated. After his death, Congress passed legislation to officially make the Secret Service and gave them responsibility for protecting the President at all times.
1903 · The Lehi Co-op Building Is Built

The Lehi Co-op Building was built to house the growing needs of the People’s Co-op. The 22,000 square foot, two story, brick building included modern technologies such as electrical wiring and a telephone system. The building was the first in Lehi to have concrete sidewalks installed. Z.C.M.I. closed the Lehi branch in 1937 and the complex was sold.
1923 · The President Dies of a Heart Attack

A Story from the Life of Samuel Fowler Samuel Fowler is the father of the first family to join the Church of Jesus Christ of Latter-day Saints in the Fowler ancestry of Elizabeth Lyn Clayton (Nana). …