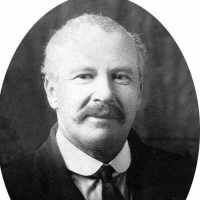 This nameless poem was found in my grandfather's (David Evan Belnap) book of memories: I live for those who love me, Whose hearts are k …