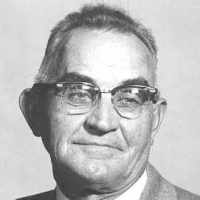 The Life Summary of Don Lyman

Put your face in a costume from Don Lyman's homelands.

Roy: Personal Notes on a Special Kind of Man