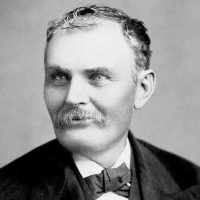 English and Scottish: chiefly from Middle English blak(e) ‘black’ (Old English blæc, blaca), a nickname given from the earliest times to a swarthy or dark-haired man. However, Middle English blac also meant ‘pale, wan’, a reflex of Old English blāc ‘pale, white’ with a shortened vowel. Compare Blatch and Blick . With rare exceptions it is impossible to disambiguate these antithetical senses in Middle English surnames. The same difficulty arises with Blake and Block .

Scottish: in Gaelic-speaking areas this name was adopted as a translation of the epithet dubh ‘dark, black-(haired)’, or of various other names based on Gaelic dubh ‘black’, see Duff .

EXPERIENCES OF A PIONEER MOTHER By Edward L. Black

I have read with interest the biographical sketches of our pioneer mothers and grandmothers’ lives that have appeared in the Deseret News. How true is the statement: “The hand that rocks the cradle …