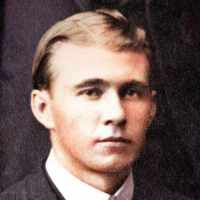 The Life Summary of John Alfred

Put your face in a costume from John Alfred's homelands.

Born in Grantsville, UT, June 14, 1880, to John Alfred Elison or Eliason and Sophia Andersson. He was called Johnny even when he went on his mission. He was of medium build and light complexion with l …