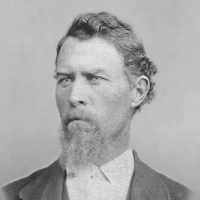 English: variant of Forster ‘worker in a forest’.

English: perhaps a nickname from Middle English foster ‘foster parent’ (Old English fōstre, a derivative of fōstrian ‘to nourish or rear’). But other explanations are equally or more likely.

Mary Jane Cluff was born on 25 June 1855 in Provo, Utah, Utah Territory to Benjamin and Mary Ellen Foster Cluff. She was the oldest of seven children, three girls and four boys. Her mother, M …