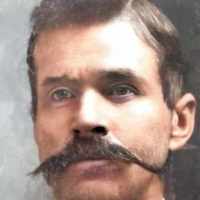 The Life Summary of Joseph Edward

Put your face in a costume from Joseph Edward's homelands.

The Life Story of Elizabeth Gibbs

On October 26, 1861 a little babe opened its eyes squinted for a moment and must have wondered where it was and how it got there. This tiny babe was the daughter of Thomas and Elizabeth Parkinson. H …