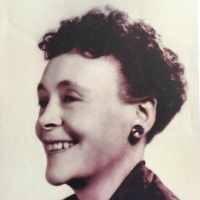 The Life Summary of Eileen Mattie

When Eileen Mattie Agren was born on 4 August 1906, in Harrisville, Weber, Utah, United States, her father, Stephen Andrew Agren, was 28 and her mother, Semantha Cornelia Shurtleff, was 30. She married Siney Donal Pearce on 6 March 1935, in Salt Lake City, Salt Lake, Utah, United States. They were the parents of at least 3 sons. She lived in Compton, Los Angeles, California, United States in 1940 and World for about 15 years. She died on 24 October 2000, in Castle Rock, Douglas, Colorado, United States, at the age of 94, and was buried in Maeser Fairview Cemetery, Vernal, Uintah, Utah, United States.

Put your face in a costume from Eileen Mattie's homelands.

"The Bank of Vernal is constructed in 1916, using bricks from Salt Lake City. Later on the bank of Vernal is known as the """"Parcel Post Bank"""" because the bricks used in constructing the building are mailed to Vernal because it is the cheapest method at the time."

Additional information of Eileen's life: she served 4 missions, Ottawa, Ontario, Canada, May 1928, a short mission in the Northwestern states mission where Eileen joined other missionaries on a short …