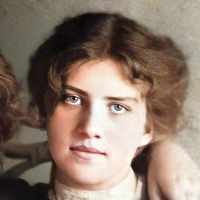 The Life Summary of Edna

English (mainly Yorkshire): variant of Crowder 1.Scottish: possibly a variant of McGrouther, from Gaelic Mac Grùdair ‘son of (the) brewer’, from grùdair ‘brewer’.

I have a memory of my great grandmother Ririe, right before her death. She was staying with my grandmother Ruth Jones Ririe Williamsen. I remember that she was ill and was laying on my grandmothers c …