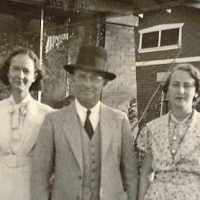 The Life Summary of Ami Lorenzo

When Ami Lorenzo Anderson was born on 6 September 1887, in Colonia Díaz, Ascensión, Chihuahua, Mexico, his father, Anders or Andrew Andersen, was 35 and his mother, Mariah Missilvia Curtis, was 21. He married Vera Juanita Pierce on 28 August 1912, in Salt Lake City, Salt Lake, Utah, United States. They were the parents of at least 3 sons and 3 daughters. He died on 16 September 1983, in Colonia Dublán, Nuevo Casas Grandes, Chihuahua, Mexico, at the age of 96, and was buried in Larkin Sunset Gardens, Sandy, Salt Lake, Utah, United States.

Put your face in a costume from Ami Lorenzo's homelands.

LIFE STORY OF ANDREW ANDERSEN Andrew Andersen was the third child and oldest son of Hans and Maren Andersen. He was born 24 October 1851 in Bredstrup, Odense, Denmark. The farm that Hans and Maren …