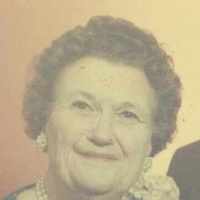 The Life of Glida Ruth

Put your face in a costume from Glida Ruth's homelands.

Variant (probably under French influence, at least in some cases) of English Walker .