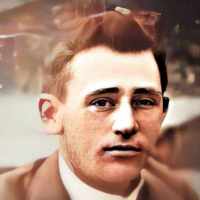 The Life Summary of Franklin Clair

Put your face in a costume from Franklin Clair's homelands.

My Father by Crystal Beers

Franklin attended district school, the Brigham Young Academy, and the Uintah Stake Academy. He assisted his father in the mercantile business. From November 1899 to 1901 he filled a mission for the …