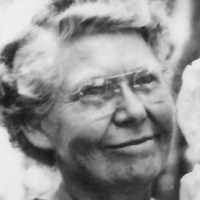 The Life Summary of Almyra Christena

Put your face in a costume from Almyra Christena's homelands.

A Sketch of My Life by Emily L. Williams Miller

A SKETCH OF MY LIFE Written in 1947 By Emily L. Williams Miller I was born in Mill Creek, Salt Lake County, Utah, 15 August 1872, a daughter of Ephraim H. Williams and Almira North Williams. My fath …