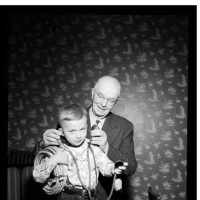 The Life Summary of John Willard

Put your face in a costume from John Willard's homelands.

On Nov 7 1882, Denver was hit with a 6.6 magnitude earthquake. It was the largest earthquake to hit in the history of Colorado.

English:from Middle English chaumbre ‘room (in a house); reception room in a palace or official building’ (Old French chambre). It is identical in implied function with the Chamberlain , which denoted an official: to pay in cameram was to pay into the exchequer, of which the camerarius or chamberer was in charge. The surname also applied to clerks employed there. As the office of Chamberlain rose in the social scale, this term remained reserved for more humble servants of the bedchamber or private quarters.(of Norman origin): habitational name from Les Chambres, Manche (France).

JOHN WILLARD CHAMBERS, JR. Written by Mabel Goddard Chambers John Willard Chambers Jr. was the 2nd child in a family of 6. He was born and raised in Ogden, Weber County and educated in the Ogden Cit …