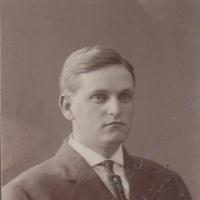 1 English: occupational name for a servant at a hall ( see Hall ).2 English: topographic name for someone who lived in a hollow or nook, Middle English hale, Old English halh.3 Swedish: compound of hall ‘hall’ + man ‘man’.

John Hallman was born in Cedar City, Utah in 1891. His father had died three months before his birth. He always wished he had seen his father. The family consisted of himself, an older sister, Hilma …