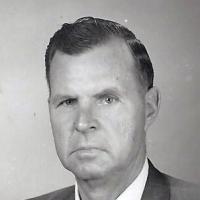 The Life of Don Cummings

Put your face in a costume from Don Cummings's homelands.

Swedish: ornamental name composed of the elements ander (an element of uncertain origin, perhaps a derivative of Greek anēr, andros ‘man’, as in Alexander ) + berg ‘mountain’.

Agnes Cummings was an artist. She started to paint later in life after she had raised her family. She had six children of her own and also raised a grandson. She and her husband were sheepherders a …