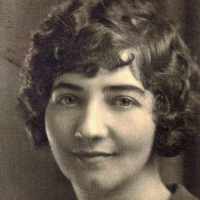 The Life Summary of Mae Eliza

Put your face in a costume from Mae Eliza's homelands.

LIFE HISTORY OF ELIZA MAE WOLFLEY MOESSER As told to her daughter, Bonnie M. Winterton I was born Oct. 29,1901 at Freedom, Wyo. (Now known as Etna, Wyoming) I was the fourth child of Rudolf Edward Wol …