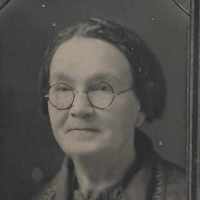 The Life Summary of Jane Sarah

Put your face in a costume from Jane Sarah's homelands.

English:from the Middle English salutation godne dæie ‘good day’, possibly applied as a nickname for someone who frequently used this greeting.possibly in some instances from Middle English god(e)day(e) (or dey(e)) ‘good dairy man’ (see Day ).