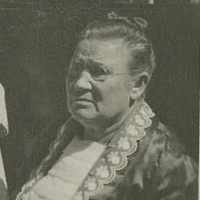 The Life of Emma Sophia

Put your face in a costume from Emma Sophia's homelands.

The first meetinghouse for the Church of Jesus Christ of Latter-day Saints was dedicated in January.
1883 · Farmington City Cemetery

The Farmington City Cemetery was established on June 6. The land was donated by one of the first pioneers to settle in Farmington; William Kelsey Rice. Many early pioneers are buried there.