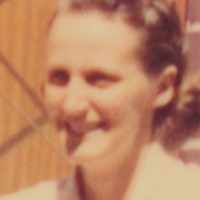 The Life of Iva May

When Iva May Rollins was born on 29 May 1916, in Centerville, Davis, Utah, United States, her father, George Wallace Rollins, was 46 and her mother, Elizabeth Ellen Rampton, was 33. She married Marlin R Green on 6 May 1938, in Salt Lake City, Salt Lake, Utah, United States. They were the parents of at least 2 sons. She lived in World in 1930 and Richland, Union, South Dakota, United States in 1969. She died on 3 October 1991, in Hayden Lake, Kootenai, Idaho, United States, at the age of 75, and was buried in Noxon, Sanders, Montana, United States.

Put your face in a costume from Iva May's homelands.

U.S. intervenes in World War I, rejects membership of League of Nations.
1919 · Oil is Discovered at Cat Creek

Located near Petroleum and Garfield counties in Montana is Cat Creek . It was here in 1919, that oil was discovered
1937 · The Neutrality Act

English: patronymic from a pet form of Rollo or Rolf .

Iva May Rollins was born 29 May 1916 in Centerville, Davis Co., Utah. She dearly loved her parents but was especially close to her father. She loved to follow him everywhere on their farm, helping wit …