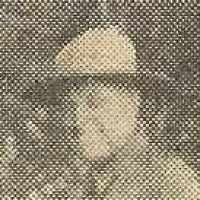 The Life Summary of Merrill Dee

Put your face in a costume from Merrill Dee's homelands.

English (of Norman origin): variant of Beale , from Old French bel(e) ‘fair, lovely’ (see Beau ), either a nickname for a handsome man or a metronymic from this word used as a female personal name.English (northern): habitational name from any of the places so named in Northumberland and Yorkshire. The former of these (Behil in early records) is named with Old English bēo ‘bee’ + hyll ‘hill’; the latter (Begale in Domesday Book) with Old English bēag ‘ring’, here probably used in the sense ‘river bend’, or an unattested personal name Bēaga derived from this word + halh ‘nook, recess’ (see Beagle 2). An additional source may be Beald, a farm in Cambridgeshire, recorded as Bele super Dedhil, c. 1195. In Lincolnshire, the surname is perhaps from a word or name for a farm derived from Scandinavian bøli ‘farm’.French (Béal): topographic name for someone who lived by a mill race, from the Lyonnaise dialect term béal, bezale, bedale (of Gaulish origin).