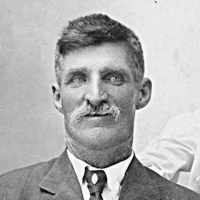 The Life Summary of Franklin Wilford

Put your face in a costume from Franklin Wilford's homelands.

Franklin Wilford Andrew was born in Greenacre, England, June 25, 1854, and was the oldest child of William and Mary Ann Ashworth Andrew. His father came to America in 1855, leaving his wife an …