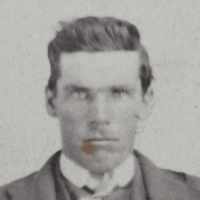 The Life Summary of Francis George

When Francis George Wall was born on 3 May 1846, in England, United Kingdom, his father, William Wall, was 33 and his mother, Sarah Sansom, was 31. He married Mary Bench on 24 June 1872, in Salt Lake City, Salt Lake, Utah, United States. They were the parents of at least 2 sons and 5 daughters. He lived in Horsley, Gloucestershire, England, United Kingdom in 1851. He registered for military service in 1866. His occupation is listed as mercantile store owner in Colonia Juárez, Casas Grandes, Chihuahua, Mexico. He died on 22 February 1946, in Salt Lake City, Salt Lake, Utah, United States, at the age of 99, and was buried in Glenwood Cemetery, Glenwood, Sevier, Utah, United States.

Put your face in a costume from Francis George's homelands.

HISTORY OF SARAH SANSOME WALL Sarah Sansome was born 30 September 1815 at Horsley Parish, Gloucestershire, England, daughter of Richard and Sarah Brinkworth Sansome. She was next youngest of nine chi …