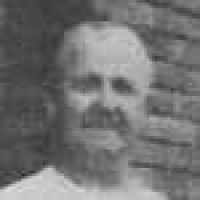 The Life Summary of George Patrick

Put your face in a costume from George Patrick's homelands.

1934 · The Construction of a Reservoir

Jewish, English, Welsh, West Indian, Guyanese, and African (mainly Nigeria): from the Biblical Hebrew personal name Aharon (which was Latinized as Aaron), borne by the first high priest of the Israelites, the brother of Moses (Exodus 4:14). Like Moses, it is probably of Egyptian origin, with a meaning no longer recoverable. In England and Wales, the name comes from the occasional adoption of Aaron as a Christian personal name. In south Wales, for example, where fixed surnames developed much later than in England, it was coined independently as a surname in the 17th–19th centuries, reflecting the enthusiasm for Old Testament personal names among Nonconformists.