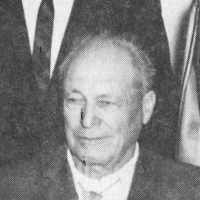 The Life of Flay Orley

When Flay Orley Peterson was born on 5 May 1899, in Colonia Díaz, Chihuahua, Mexico, his father, Andrew Christian Peterson, was 43 and his mother, Caroline Elzina Jørgensen, was 37. He married Blanche Whetten on 19 December 1929, in Deming, Luna, New Mexico, United States. They were the parents of at least 3 sons and 1 daughter. He immigrated to Columbus, Luna, New Mexico, United States in 1940 and lived in Divisadero, Ojinaga, Chihuahua, Mexico in 1930. He died on 21 September 1978, in Pasadena, Los Angeles, California, United States, at the age of 79, and was buried in Whittier, Los Angeles, California, United States.

Put your face in a costume from Flay Orley's homelands.

This Act set a price at which gold could be traded for paper money.
1912

We have always been ranchers, raised cattle and lived in the country. Flay and I met in 1928 in Colonia Juarez, Chihuahua, Mexico where I was teaching school. He came to visit my father on a business …