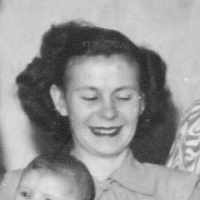 The Life of Betty Jane Marie

When Betty Jane Marie Gamber was born on 3 November 1922, in Detroit, Wayne, Michigan, United States, her father, William Lynn Gamber, was 26 and her mother, Esther Bozuhn, was 24. She married Robert Gerald Terry Jr on 20 July 1946, in Evanston, Uinta, Wyoming, United States. They were the parents of at least 2 sons. She died on 1 July 1996, at the age of 73, and was buried in Washington Heights Memorial Park, South Ogden, Weber, Utah, United States.

Put your face in a costume from Betty Jane Marie's homelands.

Warrant G. Harding died of a heart attack in the Palace hotel in San Francisco.
1928 · The Detroit Zoo

"The Detroit Zoological Society was founded in 1911, but the zoo didn't officially open until August 1, 1928. At the opening ceremony, Mayor John C. Nagel was to speak to the gathered crowd. Arriving late, Nagel parked his car behind the bear dens and as he came rushing around the front. A polar bear leaped from the moat in the den and stood directly in front of Nagel. Unaware how precarious his situation was, Nagel stuck out his hand and walked toward the polar bear joking, """"He's the reception committee. The Detroit Zoo was the first zoo in America with cage-less exhibits and the first zoo to no longer keep elephants because of the harsh winters causing psychological stress on them."
1942 · The Japanese American internment

German: occupational or nickname for an entertainer or a buffoon, from Middle High German gampen ‘to hop or jump’.