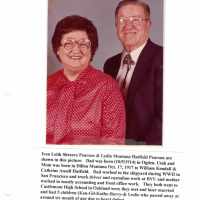 The Life of Iven Leith Shreeve

Put your face in a costume from Iven Leith Shreeve's homelands.

"Organized by a group of men in 1901, the Ogden Packing Company expanded consistently until it encompassed 6 acres for its main facility. It became the largest meat packing plant west of the Missouri River and had a daily capacity of over 3,000 animals. Their slogan in Utah was ""Raise a Pig"" so that local farmers and their sons would help in the business. After World War I most plants were forced to cut back on production because demand was dropping. It did bounce back and is still an important component in Utah's economy."
1934 · The Construction of a Reservoir

1 English: patronymic from the Middle English personal name Piers ( see Pierce ). The surname is also quite common in Ireland, where it has been established for many centuries.2 Americanized form of one or more like-sounding Ashkenazic Jewish surnames.

My father was born in Ogden, UT. where he lived with his aunt until age 12 and then went to live with his father and step mother in the San Francisco area . He later married Lydia Hatfield after gra …