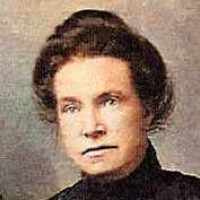 The Life Summary of Jane Adam

Put your face in a costume from Jane Adam's homelands.

Scottish (Lanarkshire) and northern Irish: shortened form of Mac Warnock, an Anglicized form of Gaelic Mac Giolla Mhearnóg ‘son of the devotee of Saint Mearnóg’, a hypocoristic form of Earnóg. Saint Mearnóg ‘My Earnóg’ is the patron saint of Kilmarnock in Scotland, and can be identified with Earnán or Tearnóg ‘Thy Earnóg’ of Kilnasaggart in south Armagh. As a sept of the Grahams in Scotland, the surname might also be replaced by Graham . Compare Warnick .

From where I stand, looking back over sixty years, the Warnock family has had a very diversified yet a very interesting history, and they are experiencing more and more of it in ever widening circles. …