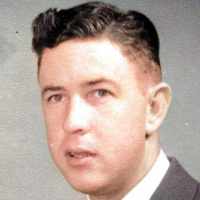 The Life of Lloyd H

When Lloyd H Ashcroft was born on 3 December 1923, in Delta, Millard, Utah, United States, his father, Josiah Emer Ashcroft, was 58 and his mother, Arrilla Hamblin, was 37. He married Alice May Thomson on 29 July 1948, in Cardston, Alberta, Canada. They were the parents of at least 1 son. He died on 22 March 2008, in Safford, Graham, Arizona, United States, at the age of 84, and was buried in Eagar, Apache, Arizona, United States.

Put your face in a costume from Lloyd H's homelands.