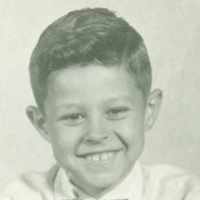 The Life of Clifford Paul

Put your face in a costume from Clifford Paul's homelands.

The Berlin Blockade was the first major crises of the Cold War. The Soviet Union blocked all access to the sectors of Berlin under Western control and offered to drop the blockade if the newly introduced Deutsche Mark was removed from West Berlin. The Berlin Blockade showed the different ideological and economic visions for postwar Europe. Even though there wasn't any fire fight during the cold war, many of these skirmishes arose and almost caused nuclear war on multiple occasions.
1952 · Uranium in Moab

Uranium mining in Utah has a history going back more than 100 years but, it started as a byproduct of vanadium mining. With the development of Nuclear Weapons, Utah saw a uranium boom in the late 1940s and early 1950s, but uranium mining declined near the end of the Cold War. Currently Uranium is still being mined but just a small amount for power plants and for research.
1958 · The First U.S. Satellite in Space