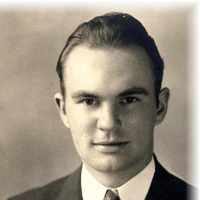 The Life Summary of Elmo James

Put your face in a costume from Elmo James's homelands.

Elmo James Anderson was born, April 3, 1918 in Cowley, Wyoming of James Ira Anderson, and Winnie Mae Allen Anderson. Elmo was the first of three children, and the only son. He had two sisters, Iona, …