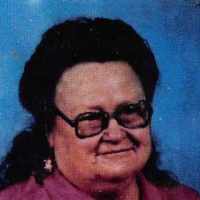 The Life of Lena May

When Lena May Blood was born on 5 March 1920, in Sheridan, Sheridan, Wyoming, United States, her father, John Frankland Blood, was 44 and her mother, Dorothy Enola Buck, was 23. She married Wesley Woodrow Shandy on 18 June 1936. They were the parents of at least 3 sons. She died on 26 October 1994, at the age of 74, and was buried in Torrington, Goshen, Wyoming, United States.

Put your face in a costume from Lena May's homelands.

1 English: evidently from Old English blōd ‘blood’, but with what significance is not clear. In Middle English the word was in use as a metonymic occupational term for a physician, i.e. one who lets blood, and also as an affectionate term of address for a blood relative.2 Welsh: Anglicized form of Welsh ap Llwyd ‘son of Llwyd’ ( see Lloyd ).