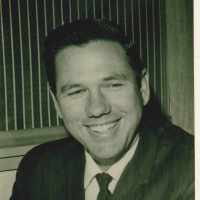 The Life of Gary Elton

When Gary Elton Rippstein was born on 12 April 1939, in Downey, Los Angeles, California, United States, his father, Eugene Victor Rippstein, was 28 and his mother, Emily Elizabeth Bradshaw, was 27. He died on 22 December 1968, in his hometown, at the age of 29, and was buried in Lyman, Wayne, Utah, United States.

Put your face in a costume from Gary Elton's homelands.

The Defense Depot Ogden Utah was one of several facilities located around the nation that produced and maintain equiptment needed for the Armed Forces. During World War II, it was also used to house prisoners of war from both Germany and Italy. It has since been moved to Hill Airforce Base, south of Ogden, and the land has been mostly been made into Ogden's Business Depot.
1948 · The Beginning of the Cold War