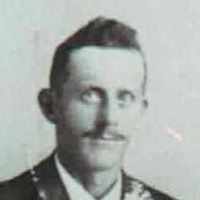 When Jacob Roethlisberger was born on 22 June 1878, in Langnau im Emmental, Bern, Switzerland, his father, Jakob Rothlisberger Sr, was 33 and his mother, Susanna Beetschen, was 32. He married Martha Rizpah Holgate on 27 August 1902, in St. Johns, Apache, Arizona, United States. They were the parents of at least 3 sons and 6 daughters. He lived in St Johns Precinct, Apache, Arizona, United States in 1900. He died on 18 October 1918, in Kline, La Plata, Colorado, United States, at the age of 40, and was buried in Kline, La Plata, Colorado, United States.

On Nov 8 1881, Denver becomes the state capitol, due to an economic boom the city experienced in the 1880s.
1890 · The Sherman Antitrust Act

Swiss German: habitational name for someone from a place called Röthlisberg or Rödlingsberg, so named from the personal name Rödling, a pet form of Rudolf + Middle High German berc ‘mountain’.